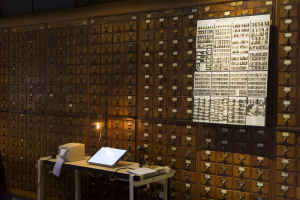 Written in 1907, Un code télégraphique du portrait parlé is an attempt to translate the 'spoken portrait'(a face-description technique created by Alphonse Bertillon, the inventor of legal antropometry in Paris) into numbers. By implementing this code, it was hoped that faces of criminals and fugitives could easily be communicated over the telegraphic network in between countries. In its form, content and ambition this text represents our complicated relationship with documentation technologies. This text sparked the creation of the following installations for three reasons:

- First, the text is an algorithm in itself, a compression algorithm, or to be more precise, the presentation of a compression algorithm. It tries to reduce the information to smaller pieces while keeping it legible for the person who has the code. In this regard it is linked to the way we create technology, our pursuit for more efficiency, quicker results, cheaper methods. It represents our appetite for putting numbers on the entire world, measuring the smallest things, labeling the tiniest differences. This text itself embodies the vision of the Mundaneum.

- Second it is about the reasons for and the applications of technology. It is almost ironic that this text was in the selected archives presented to us in a time when face recognition and data surveillance are so much in the news. This text bears the same characteristics as some of today's technology: motivated by social control, classifying people, laying the basis for a surveillance society. Facial features are at the heart of recent controversies: mugshots were standardized by Bertillon, now they are used to train neural network to predict criminals from law-abiding citizens. Facial recognition systems allow the arrest of criminals via CCTV infrastructure and some assert that people’s features can predict sexual orientation.

- The last point is about how it represents the evolution of mankind’s techno-structure. What our tools allow us to do, what they forbid, what they hinder, what they make us remember and what they make us forget. This document enables a classification between people and a certain vision of what normality is. It breaks the continuum into pieces thus allowing stigmatization/discrimination. On the other hand this document also feels obsolete today, because our techno-structure does not need such detailed written descriptions about fugitives, criminals or citizens. We can now find fingerprints, iris scans or DNA info in large datasets and compare them directly. Sometimes the technological systems do not even need human supervision and recognize directly the identity of a person via their facial features or their gait. Computers do not use intricate written language to describe a face, but arrays of integers. Hence all the words used in this documents seem désuets, dated. Have we forgotten what some of them mean? Did photography make us forget how to describe faces? Will voice-assistance software teach us again?

Writing with Otlet is a character generator that uses the spoken portrait code as its database. Random numbers are generated and translated into a set of features. By creating unique instances, the algorithm reveals the richness of the description that is possible with the portrait code while at the same time embodying its nuances. 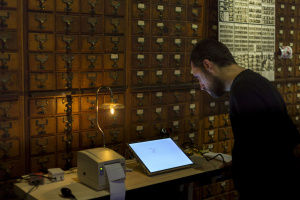 An interpretation of Bertillon's spoken portrait.

This work draws a parallel between Bertillon systems and current ones. A webcam linked to a facial recognition algorithm captures the beholder's face and translates it into numbers on a canvas, displaying it alongside Bertillon's labelled faces.